The second REGATRACE multi-stakeholder participatory workshop “Biomethane/biogas vision and roadmap” was organized by Finnish Biocycle and Biogas Association in cooperation with the REGATRACE project as an on-line session on mid-February 2021.

The workshop gathered together about 30 key stakeholders of the biomethane and biogas value chain of Finland such as producers, end-users, researchers, authorities, specialists from the Finnish food industries and agriculture.

The objectives of the workshop were:

RESULTS OF THE WORKSHOP

”The vision of the Finnish biogas sector is to be competitive and vital, and being strongly integrated into the modern energy system and network. Besides that, the sector holds a strong foothold in national the nutrient recycling activities. The biogas production level in Finland will reach 4 TWh by 2030. Most of the biogas would be upgraded to biomethane; so that the biogas sector could serve the growing demand in sustainable and clean energy from the transport and industry sectors. The new biogas production would be based in particular on the utilization of agricultural-based by-products, but new technologies and feeds would also play a role (e.g. gasification).”

The stakeholders estimated that the increase of national biogas production from 1 TWh to 4 TWh could bring along many benefits such as more than 100 new biogas plant installations around Finland, more waste handling capacity to recycling biowaste and other organic waste streams and higher phosphorus and nitrogen recycling rates. Moreover, the raised uses of biomethane in road transport could reduce the national CO2 emissions even about 900 000 million tons, of course being strongly depend on the role of gas vehicles in the Finnish vehicles fleet in 2030.

To compile the roadmap, the participants of the workshop were asked to assess the need of different policy measures. The measures were discussed in three time windows; measures to be implemented in 2021-2023, 2024-2030 and 2030-2035.  According to the participants, right now it is important to ensure the availability of biomethane for users, in which the increased production volumes of biogas/biomethane and the number of gas filling play important roles. This requires public investment money is needed through the 2020s. Later the development of new market mechanisms, such as GoO-system, becomes also important. Between 2025-2030, the demand for biomethane in shipping and industries should be strengthen. The role of digestate is becoming more vital year after year, because it can improve the economics of biogas plants remarkably.  Through the 2020s, there is a need to improve market conditions of recycled nutrients and fertilizers needs namely by increasing the supply of a good quality products and finding right incentives to raise up the demand side.

The summary of the measures is given in a picture below. 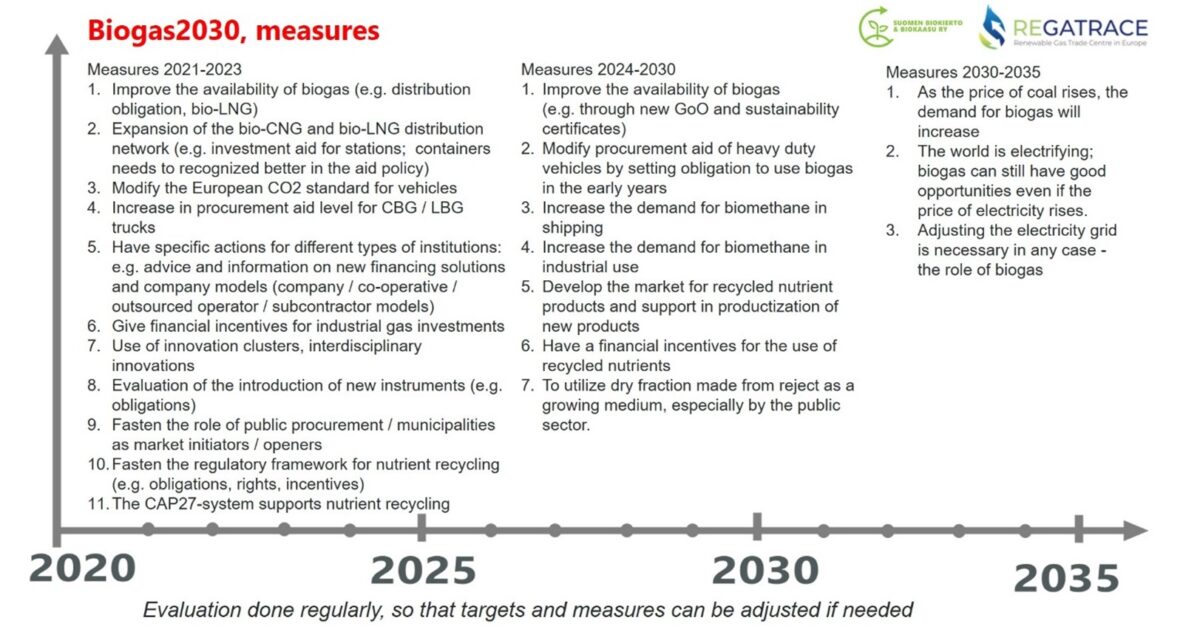 Next the Finnish Biocycle and Biogas Association prepares a (draft) national Biogas Roadmap that will be presented together with a (draft) Feasibility Guidance in the 3rd workshop in Autumn 2021.